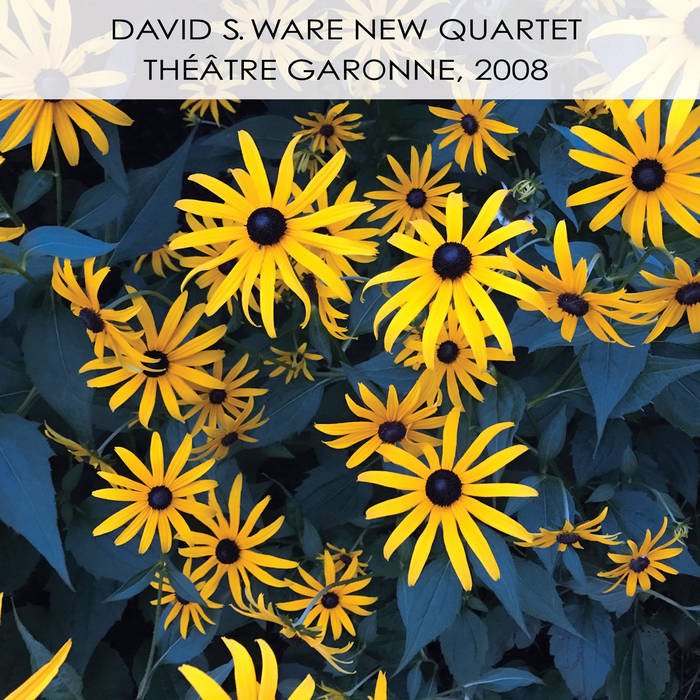 jeffrey maurer Thanks to AUM Fidelity and everyone involved, for bringing this recording forward.
A powerful performance.
Beautiful capture.
.....And thanks for including all scans and liner notes!

The David S. Ware Archive Series was launched in November 2015, and AUM Fidelity has marked the anniversary of his birth – November 7, 1949 – with a vital new edition therein every year since.
David S. Ware was a master saxophonist of the highest order, and an unparalleled sonic alchemist of the modern jazz era. As his distinctly potent sound & vision was an integral inspiration toward the creation/devotion of AUM Fidelity, that mission continues strong with the DSW-ARC series.

Théâtre Garonne, 2008 presents a luminous concert from a transitional period in David S. Ware’s ever-creative life. His 17-year-longstanding Quartet with Matthew Shipp & William Parker, which had achieved a naturally ascendant worldwide acclaim, performed their final concerts on a triumphal European tour in March 2007. Knowing that this end was coming, David had already begun writing new compositions and conceptualizing what would become his :new: quartet. The first iteration of this group – foundationally with guitarist Joe Morris – debuted at New York’s Iridium jazz club in mid-July. The group was made whole with Ware’s stalwart musical companion William Parker back on bass and fellow master musician Warren Smith on drums.

As had been Ware’s method with his Quartet, the group worked the new material live on stage together toward a studio recording thereof. That session took place in May 2008, and the album Shakti – davidsware.bandcamp.com/album/shakti – was the gorgeous result. The change from Shipp’s 88 keys to Morris’ cleanly articulated lines on 6 strings played a substantial role in the resulting sound. The density of much of Ware’s classic Quartet work gave way for a more ready hearing to the nuance & focus on melody which is intrinsic to all his work.

Riding a musical high, the DSW New Quartet flew to France later that same month for a concert at the welcoming and familiar environs of Théâtre Garonne. They performed bountifully expanded and wholly re-arranged versions of compositions on the Shakti album, as well as the equally gripping “Durga” which is previously unissued in any form. The release of this beautiful concert gracefully doubles the work available by the group, which may well have continued developing were it not for the exceptionally urgent health concerns just on the horizon. A kidney transplant in May 2009 allowed for the final astonishing phase of David’s work, all of which was created spontaneously in open form. Together with Shakti before it, these are the last of Ware’s pre-composed themes to be used as springboards for illuminated performance.

As Joe Morris recalls in the liner notes: “I remember my experience on stage during this performance. As I played and listened I was aware that I was awed by the unlimited power in the sound and the melodies coming out of David’s horn. David’s playing here transcends his struggles, and like every one of his performances offers us a means to overcome our own.”

Recorded live in performance at Théâtre Garonne
in Toulouse, France on May 24, 2008

Produced for release by Steven Joerg,
in cooperation with Setsuko S. Ware

David S. Ware was a major saxophonist, conceptualist and bandleader. As major as they come. He began practicing meditation as a young man. Going forward, his spiritual and musical development were inseparably intertwined.

Featured here are his premier works for AUM Fidelity, including the ongoing DSW-ARC series which began 3 years following his spirit's evolution.

Bandcamp Daily  your guide to the world of Bandcamp

Featured sounds from Fly Lo and Ahmed Idris, plus Mother Nature hops on to drop off new project